He’s with the Amahoro Gorilla Family and he lives in Volcanoes National Park, Rwanda. As a juvenile, he’s full of fun and games. This I learned when he sat beside me and first looked the other way attempting to show disinterest. I did the same. The guide made gorilla sounds enticing him to turn towards the camera I quickly handed to him. He took many pictures. When a German woman on the same tour of eight wanted to trade places with me, my furry pal gave me a playful nudge, stepped on my foot with his front right paw and went to play with one of his siblings. He calls the shots, not the tourists. I tipped over from his nudge – and from the shock – we’re not supposed to get that close to the gorillas they told us in the briefing. I’ll never forget it.

The gorilla trek started with a 6am breakfast – this is the middle of the night for Dave. They packed us a snack for the road ensuring we wouldn’t get hungry before our mid-afternoon hot lunch. There will be no weight loss on this trip. Hotel personnel dressed our calves with gators (it was seriously decadent to have someone do that). Our road guide (as opposed to gorilla guide) drove us to the gorilla trekking briefing center where we were told what to expect and how to behave around gorillas in the wild during which they played a video of lucky tourists encountering their first gorilla and telling viewers like us that it will happen for us too.  I turn away from the video, not sure it will happen for me. After a forty-minute drive to the Amahoro group trailhead, our trek begins around 9am.

Volcanoes Park has twenty Gorilla groups, twelve are dedicated to tourism and eight to research. Each group has a massive silverback running the show. The Amahoro group has twenty members while the largest of the groups has thirty-three. The oldest brother took over when their father died four years ago. Weighing in at 200kg or 440 pounds, he’s the biggest and easily keeps his younger brothers in line; although, with their peaceful nature they never challenge him. Not every group leader has it that easy. That’s why this group is named Amahoro, a word which means peace in Kinyarwanda, the language of Rwanda.

The process of finding the gorillas is fascinating. Five trackers assigned to each group awake at the crack of dawn to execute a morning search. They know where the gorillas slept last night. Their task at hand is to find out which direction they went to eat their breakfast, i.e., up the mountain (means an arduous trek), across the mountain (means a medium difficulty trek), or down the mountain (means medium difficulty too – the Amahoro group doesn’t take it easy on its observers). Chief Silverback keeps the group moving to feast on bamboo, thistle stems and leaves, and the bark of the eucalyptus tree originally from Australia. Their schedule is predictable eat, rest, eat, rest. Their location is anyone’s guess. It’s bamboo season. Gorillas like to get drunk on bamboo and have a silly time on their own making it less routine and more work for the trackers.

We start our hike with guides and porters. They insist I take along a walking stick which I make the porter carry. We have a great porter. He is following my every move (stupid or otherwise), he carries my backpack without complaining, he has the mid-morning snack ready when we take a break, and he is responsible for cutting back the vegetation with his machete. Did I mention, gorillas like to walk through nettle bushes, overgrown bamboo, and thorny vines that wrap around your camera, jacket and wrist? The stinging nettles are the worst. Their sting lasts until the next day – even the gardening gloves loaned to me by a fellow trekker didn’t keep the poisonous thorn out. Up ahead of us, the trackers radio back the location of our group. We have to wait until the right moment or we risk taking a trail that will be twice as long as need be. We’re all for resting and waiting for the final decision.

“The trackers have found the gorillas. We will take the middle trail,” our trail guide jolts us from our meanderings with his proclamation.

We walk, we crouch, we walk and crouch, seemingly going in circles. I’m panting and taking videos of the experience. The sound is gross in my ears when I play it back. Those videos will never be shared. My porter comes to carry my jacket and offers me water. Then it happens. The silverback lets us see him. He shows us the way to his clan, but first, he wants us to look at his back, stretching to display his girth, seeing us without looking directly into our eyes. He is too good for us. What a fine Chief he is. 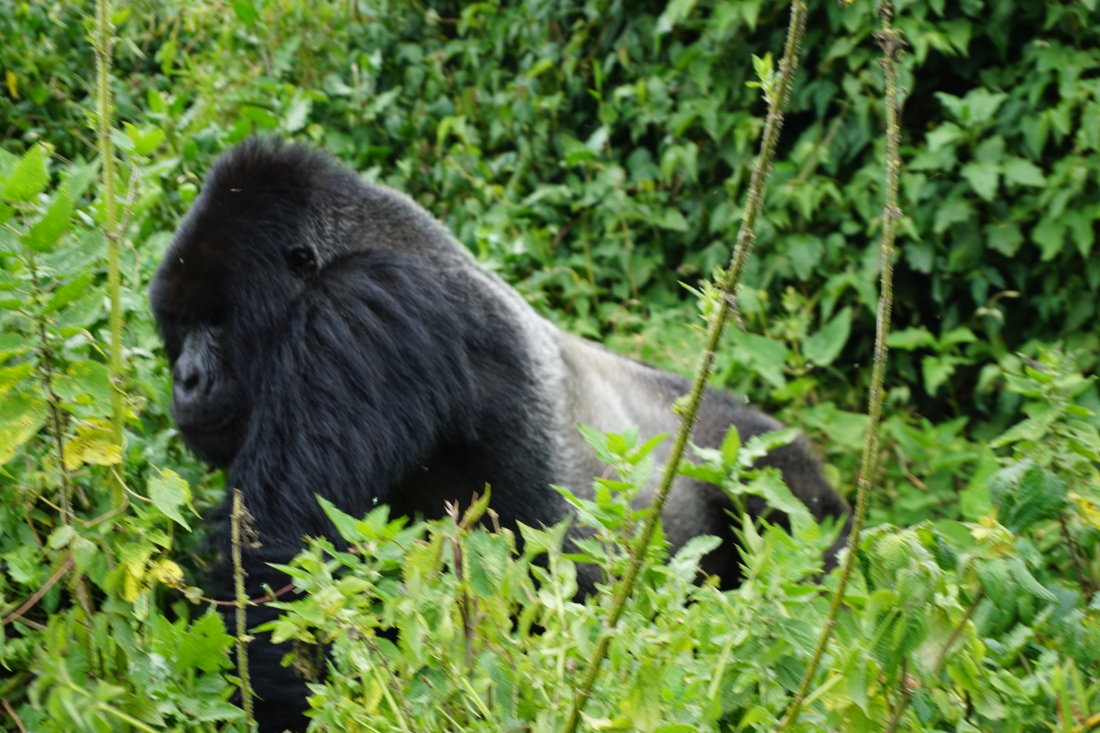 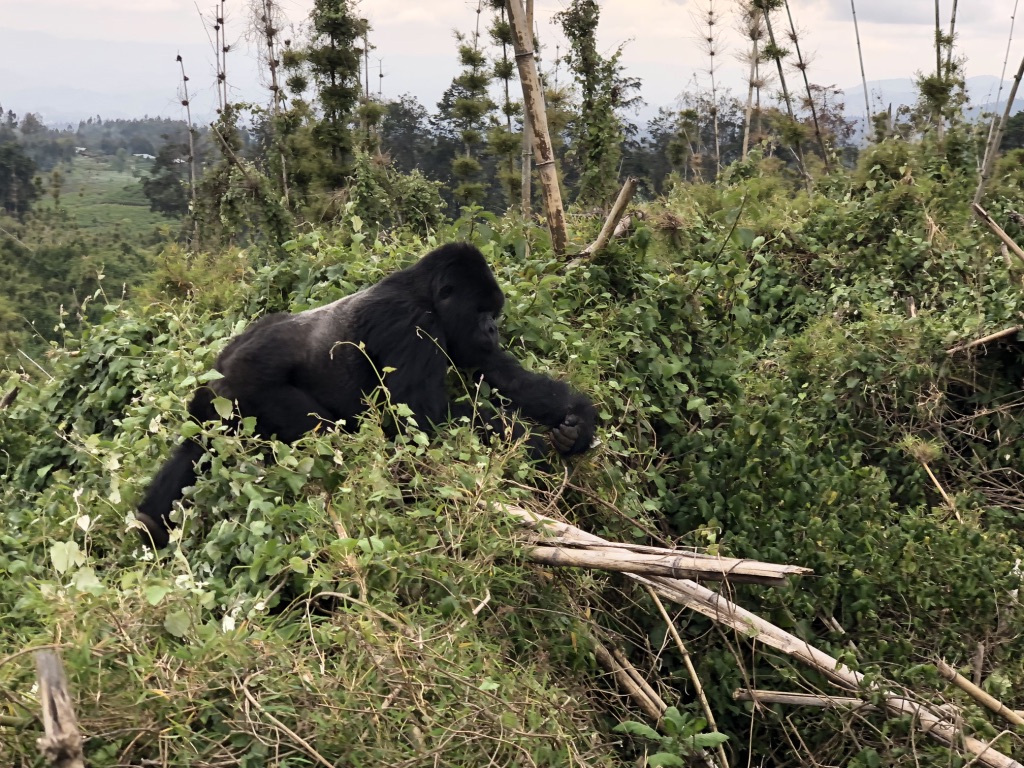 One by one we see his clan. First, the outgoing juveniles who want to play and nudge. 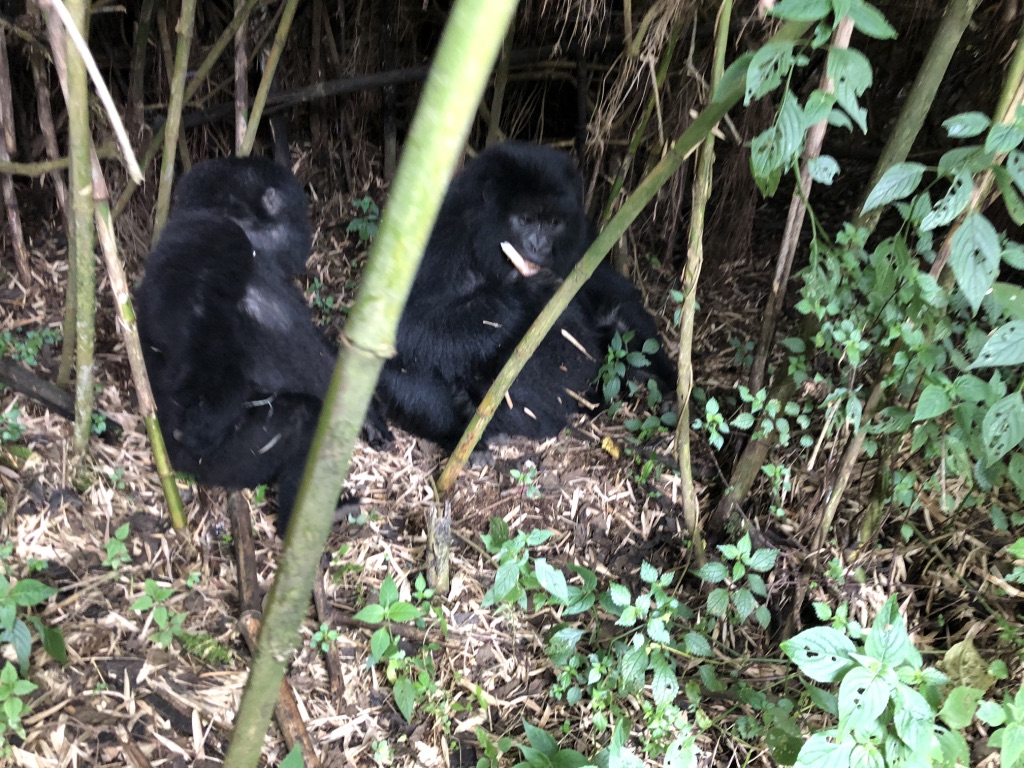 Then the mother who proudly shows us her son.

Then another silverback, the chief’s younger brother. More relatives appear, they sit peeling the outer layer of the thistle and chewing the stalk like a celery stick taking the leaves and stripping them like I do I with a bunch of thyme. They munch on the leaves bottom end first. I’m hungry for that mid-morning snack I didn’t think I needed when we left at 6:30am. The climb is not steep but it is not a clear trail. My porter clears some of the forest growth for us. He is a good worker. The vines threaten to thwack us in the face as one person walks through them. I choose to walk behind a nice person from Philadelphia who holds the vines and bamboo so they don’t slap me. She is the sister of the person who loaned me the gardening gloves. We’re told at the beginning that we will only have an hour with the gorillas. We time it. One hour twenty-three minutes. The first few minutes with the silverback guiding us doesn’t count. We are grateful for the extra time. 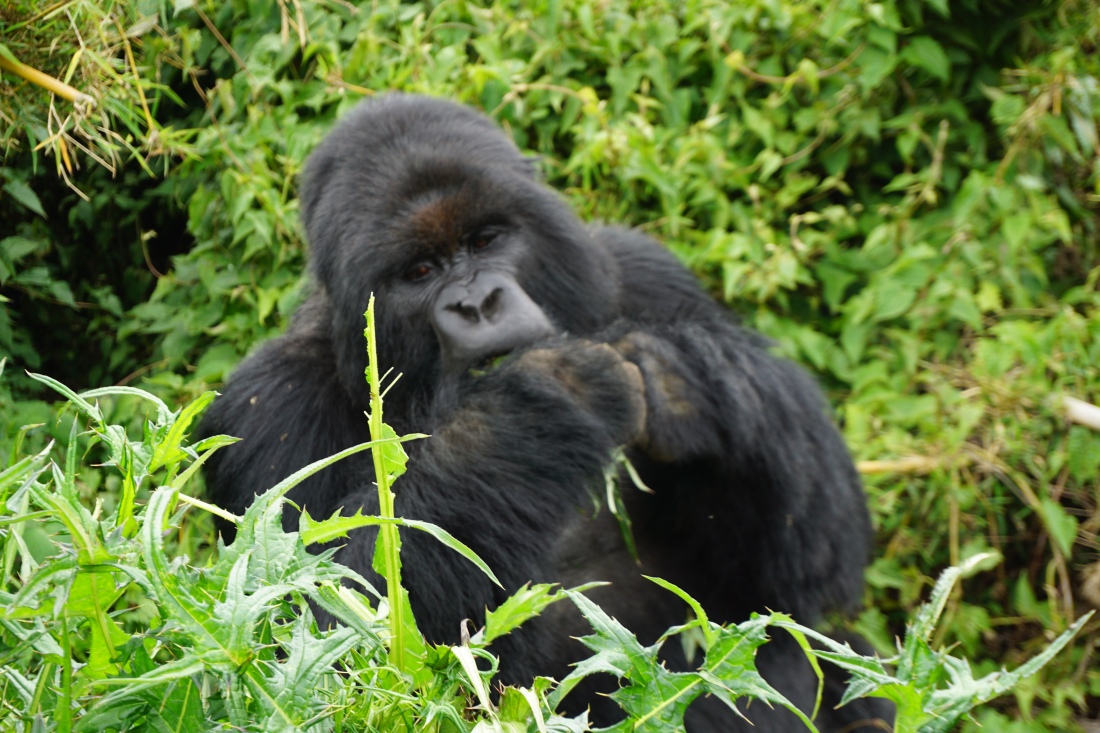 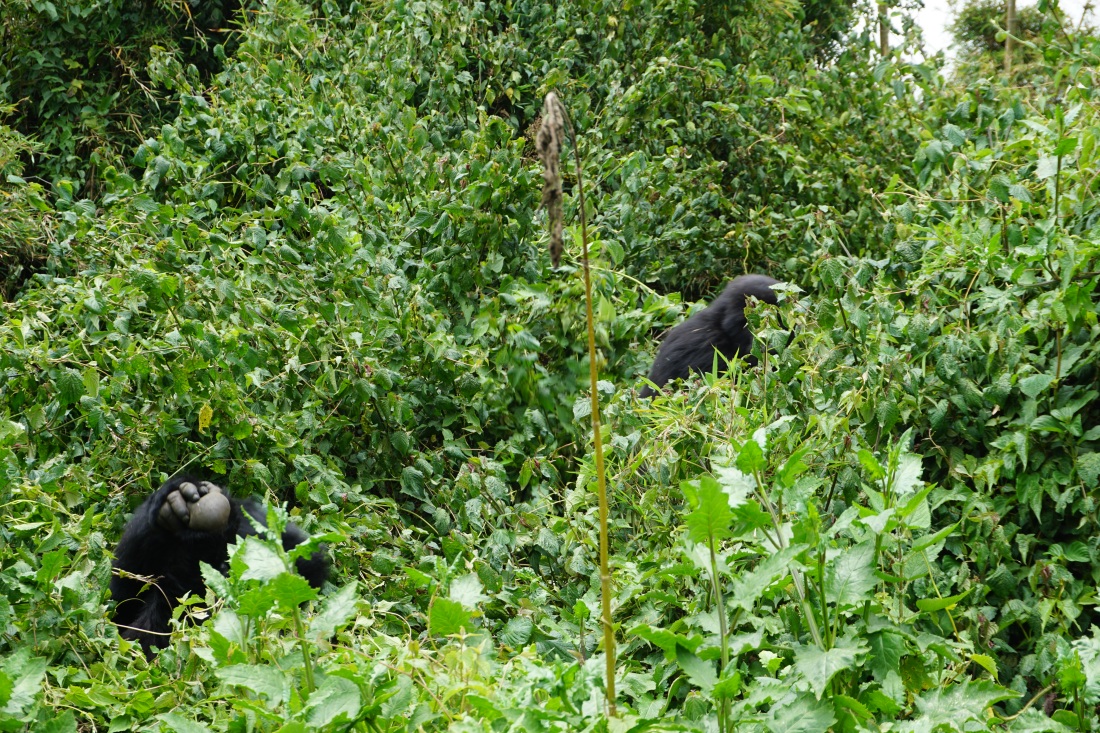 Rwanda doubled their prices for a gorilla trekking permit this year. We bought ours last year for $750 apiece. The increase doesn’t seem to have affected the demand one bit. Maybe it will take time for folks to choose Uganda instead. I’ve never been to Uganda but heard from experienced gorilla trekkers (did you know there was such a thing?) that Uganda’s price for trekking is $600 per person. There are not as many gorillas in Uganda, I’m told. Dian Fossey has her center in Rwanda (which we stopped at along the way) so maybe that’s why the proliferation of the species has occurred more in Rwanda. Or, maybe it’s the hundreds of millions of dollars that Warren Buffet’s son, Howard, and his foundation have poured into Rwanda’s infrastructure and the preservation of Volcanoes Park. They (Howard and his foundation) wanted to shut the park down for a time to allow the gorillas to reproduce more rapidly. The government of Rwanda agreed in principle; however, that could severely dampen the economy. They settled on raising the price of the permit to $1500. Did you know many travelers to Volcanoes trek two or three days in a row? The first day to take pictures, the second day to experience it. Dave and I decided we could multi-task.  Our road guide also told us several new high-high end hotels are being built. A room at one of them will set you back $3,000-$10,000 a night. Will gorilla trekking in Rwanda become an elitist sport? The park borders are not distinct. Gorillas move freely between Rwanda, The Congo, and Uganda. I can only guess that the reason they may have more in Rwanda is the special attention they give to them there.

We return to our hotel by 2pm where the gator installer is waiting to remove our foot gear slipping our tired feet into flip-flops. He takes away my boots caked with mud and gorilla poop.

“We’ll clean them for you now,” he says like it’s perfectly normal to be waited on, literally, hand and foot.

Before I close, I want to mention the energetic Golden Monkeys of Volcanoes National Park. If you have time for another trek and don’t want to drop a thousand and a half bucks, you can easily get on a Golden Monkey tour the day of for about $100. We had a blast with these hyper creatures. A few of them even acting like gorillas, i.e., being curious about us. If you go on a monkey trek, my advice is to find a place to sit calmly near a food source (eucalyptus, bamboo or potatoes) and wait. Like all good things in life, once you have prepared for it, be patient, and let it happen for you. 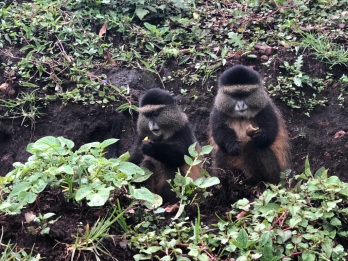 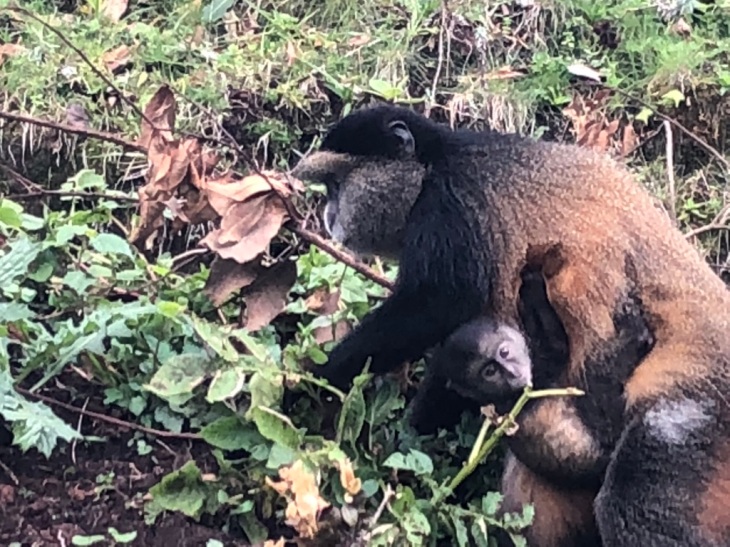 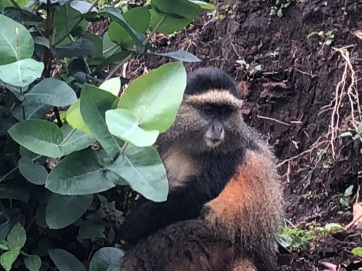 Next up: I kiss and hug a giraffe!  And, how Africans signal to each other on the road. Radar detectors won’t help you here but your African brother will give you a hand signal about speed traps on the road ahead.

Cyndie Zikmund's essays have been published by The Literary Traveler and accepted for the June 2020 publication of the Magnolia Review. Her personal experience blog, covering adventures to Africa, South America, and North Dakota can be found at cyndiezikmund.com. She holds an MFA from Queens University of Charlotte, an MBA from Santa Clara University, and a BS EECS from UC Berkeley. View all posts by Cyndie Zikmund

One thought on “Nudged by a Mountain Gorilla, Stared Down by a Golden Monkey”